Photography is usually one of the professions where, if you do a bad job nobody dies but when I photographed the Chrysler Building there was every chance that if we messed up – statistically someone was going to get hurt. We fabricated a scaffold with adjustable platforms to mount four motorized Hasselblad cameras and hang it over the edge of the Chrysler Building to get this viewpoint. One of my assistants, a bit of an electronics buff wired all the cameras to a single switching box so I could fire them all with one button. It so happened that the previous tenants had vacated the week before so we had the whole wing of the floor to ourselves. We strung climbing rope through the windows and around the building as a main lifeline and clipped ourselves onto the line with harnesses. The whole heavy contraption was lowered and raised about thirty times over rush hour pedestrian traffic some 57 stories above Lexington Avenue as we changed film backs and adjusted exposures and made slight adjustments in camera angles. Even though we were all roped and harnessed in, if anything fell, say a film back or film slide and hit someone it would have been a disaster.
We photographed the building over several days during a couple of sunsets and sunrises, even at different times of year but the best shot was taken the first day. It was one of those miraculously rare clear days when the pollution was blown out to sea leaving metropolis looking like it just got out of the bath. I used Tungsten film to accentuate the blues of magic hour when two divergent spectrums of light, blues and reds, coverag 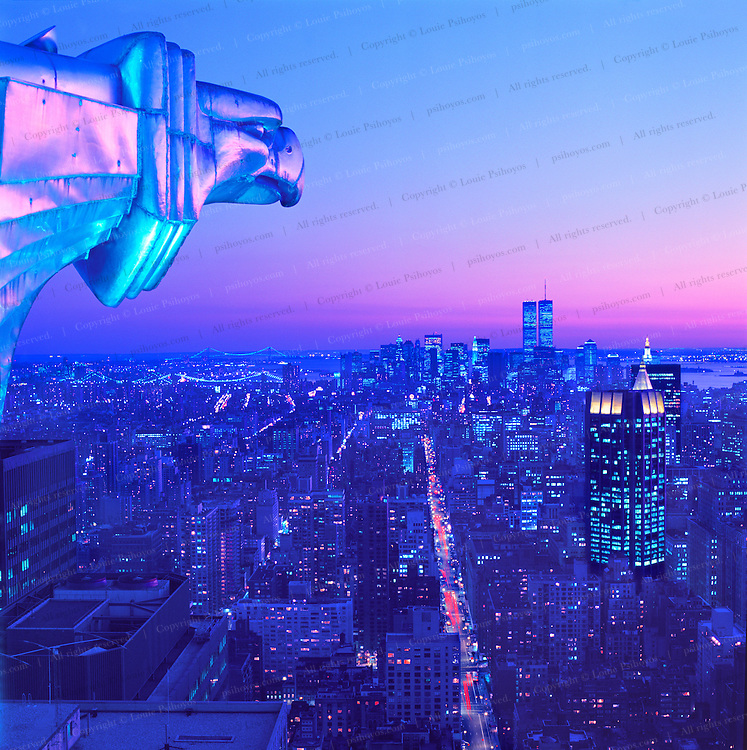